It’s interesting how much having a child affects your life. I’m not just talking about the lack of sleep, the change in your social life, or the mind-numbing boredom that can accompany becoming a parent. Having a child can also really change how you view money and your financial future. How to save money fast is definitely a thought that crosses new parents minds!

Even before my son came along, the hubs and I were always pretty careful with our money. We didn’t carry any debt, saved for a small car payment and our mortgage, and we were generally fairly thrifty. Then we adopted our little Finnigan and we realized how much we could improve the way we handled our finances.

Here are 5 ways becoming a parent has affected the way I think about money…….

We *Finally* Got a Will

While everyone, regardless if they are a parent or not, should have a Last Will – as well as a Healthcare Directive and Power of Attorney – it is infinitely more important once you have a child. Thinking about your mortality and how your death would affect your kid(s) really has the ability to put ants in your pants in regards to getting this done and over with. It’s really no wonder, though, as no one wants to leave their children in the hands of the state, both in regards to their custody as well as the finances needed to support them.

If you have yet to create a will, we highly recommend going with LegalZoom. Starting at just $69, you will get a legally binding, not to mention thorough, document that will protect your estate and your heirs if you pass away. I used LegalZoom to build a will for my aunt and it was incredibly easy and simple. Learn more here!

Once Finn came along, we really put our back into building up our savings. Under normal circumstances, we would have had a significant amount of money saved up prior to his birth, but that account was drained to pay for his adoption. While it is in everyone’s best interest to have significant savings prior to becoming parents, we are proof that this is not always possible. Therefore, once we paid off his adoption, we became committed to rebuilding our savings and emergency funds.

If you struggle with building and maintaining your savings, consider this handy-dandy budgeting guide Greg and Holly put together. In it, you will see that they encourage everyone to pay themselves first. This means that before paying your bills or allocating spending money, you put money into your savings. It really is a great way to make sure you aren’t skimping on saving for your future.

We Upped Our Life Insurance

Before becoming parents, we purchased life insurance for both myself and my hubby. The policies would supply our spouse with enough money to pay off the mortgage if one of us were to pass away. Once Finn came along, though, we realized that we would each need a significantly larger policy.

Think about it…. you need a large enough policy to quite literally replace the role of a parent. Not only does that include the money they would bring in to support your household, but it also needs to cover things like daycare or a nanny. Too many people financially struggle trying to raise their children after the death of their spouse, but it doesn’t have to be like that. If you don’t have a policy, start by getting a free term life insurance quote from PolicyGenius.

We built our house almost 12 years ago but never put on a deck, so our sliding glass door in our dining room literally leads to a 10 foot drop. Yet, generally, we were OK with that. We aren’t really fans of entertaining and being vegans, we don’t grill very often, so we didn’t need a deck. But once FinnFinn started walking, we realized how fun it would be to have a deck where he could play outside in an enclosed space. So, we started the process of having one built.

Soon after, I was unfortunately laid off from my job. The thought of putting on a deck, even though we had the money in savings, seemed like a risky financial move. If we didn’t have Finn we would have likely gone through with the build, but it would be irresponsible for us to use that money when I have no idea when I will find another job. When you have kids, you really need to consider the long-term, even if it means holding off on a dream or two.

I love myself some Amazon Prime. While I in no way had a spending problem, I used to generally buy whatever I wanted, especially on Amazon. New Crocs? Hell yeah! The newest comedy on DVD? Sold! A case of vegan chocolate? Count me in! Then Finnigan came roaring into our lives and I started paying more attention to wants vs. needs.

One way I make sure I am able to determine if I actually need an item is I leave it in my shopping cart for at least 24 hours. More times than not I don’t end up purchasing and if I do buy it, I feel better about that decision. So I ended up skipping the Crocs and DVD, but I grabbed that case of vegan chocolate because ……..chocolate.

Sure, becoming a parent means you need to make some sacrifices, but the joys my sweet, smooshie Finn brings makes everything worth it. I’m glad that I’m protecting him by being diligent with my finances. I’m glad that he will learn how to be responsible with money from our lead. And, I’m glad that I can give him the life he deserves.

How has becoming a parent changed the way you think about money? We’d love to hear about it in the comments below!

Financial Realities vs. Wishful Thinking: Why Financing Your Smartphone is a Terrible Idea 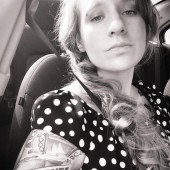 Emmy is a mom, animal advocate, and a major Star Trek nerd. She lives in the Twin Cities with her one year old son, husband, and 5 pain-in-the-butt rescued animals. She just started her first blog, Vegan in the Boonies, which you can check out here: http://www.veganintheboonies.com.